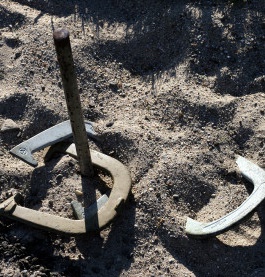 Donald A. Stittleburg, age 92, passed away Wednesday, May 13, 2020 at UW Hospital.  Don was born on January 25, 1928, in Wonewoc, the youngest child of Cecelia (Bauer) and Joseph Stittleburg. Don spent his youth working on the family farm where he developed a great love of the outdoors.  He served in the US Army for two years, during the Korean conflict, before returning to the Wonewoc area where he met his lifelong love Marianne Opal Berndt.

On September 9, 1961, Don and Marianne were married at Saint Jerome’s Catholic Church in Wonewoc. Don and Marianne settled in Reedsburg where Don worked at Grede Foundries for 33 years. Don was a lifetime member of the Sacred Heart Catholic Church. He was a competitive horseshoe player and traveled to tournaments across the state in the summers.  Don especially enjoyed teaming up with his son Doug in doubles tournaments.  He was an avid fisherman, hunter, and also enjoyed playing baseball, trapping, and gardening. Don was a natural handyman, problem solver, and took pride in a full day’s work.  He loved spending time with his family and was quick with a smile or words of advice for anyone in need. Don continued learning, even later in life, embracing computers and the internet, which he always commented was such a big advancement from the typewriters he learned to repair in his youth.

A private Mass of Christian Burial will be held at Sacred Heart Catholic Church in Reedsburg with Fr. David Carrano officiating. Burial with military rites will follow in the Pine Eden Cemetery, Wonewoc. Due to COVID-19, a celebration of life will be held at a later date.

The family wishes to thank the medical professionals at Reedsburg EMS, UW Hospital, and St Mary’s Hospital for their care of Don through the years. Memorials may be made to Sacred Heart Catholic Church in Reedsburg.
The Farber Funeral Home, Reedsburg, is assisting the family.