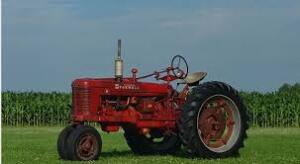 On July 5, 1991, Jerry was united in marriage to Rita King.  Together they enjoyed 29 years.  She preceded him in death on July 20, 2019. Gerald spent most of his career as a Greyhound Bus driver. In his earlier years, he hauled milk in Monroe, and operated a gas station in Loganville when he first moved to the area.

He enjoyed spending his time at auctions, gas and steam shows, camping, and simply visiting family and friends with Rita. He was always there to lend a hand to a neighbor, and in his retirement, could almost always be found in his shop fixing stuff.

In addition to his parents, he was preceded in death by his brother Jim.

Funeral Services for Gerald will be held Thursday, August 12, 2021, at 1:00 pm at Farber Funeral Home in Reedsburg.  Pastor Beth Voight will officiate.  Visitation will also be on Thursday, at the funeral home from 11:00 am until the time of service.  Burial will follow services at the Westfield Cemetery in Loganville.

A memorial fund has been established in his name.

The Farber Funeral Home is assisting the family with the arrangements.